Large wall paintings – also referred to as mural – are painted on a permanent structure, such as e.g. a wall or ceiling. Paintings can be traditionally found in public premises, often as part of interior architecture. There are many different techniques to implement wall paintings. Gateway to the East and West was done using fresco technique in which the picture is painted on a new, still moist mortar base. As the mortar dries, a durable and water-repellent surface is formed and the picture becomes an integral part of the structure. Other wall painting techniques include e.g. al secco in which the picture is painted on dry lime mortar, as well as oil, tempera or acryl painting. Modern graffiti is often made with spray paint.

It was clear that such a big wall painting could not be removed and stored as a complete wall. Conservators Mats Sjöström and Emilia Kallinen from the Turku Museum Centre made a big effort in finding out about the methods and materials suited to the detaching, storing and re-attaching of the fresco. They consulted Robert Rogal, Polish art conservator and professor of the Nicolaus Copernicus University about the suitability of the destructive strappo technique for detaching the wall painting. The technique was tested with several “recipes” together with Professor Rogal before starting the actual work, and at the same time, he trained the whole team in using the strappo technique.

The fresco was detached in as large pieces as possible that followed the composition of the work of art. When the painting was detached, some of its pigment remained in the wall surface, so the painting needs to be retouched. The detaching process also revealed motifs that the artists had left out of the final painting.

The detaching of the fresco started in January and the work was completed in the spring. The detaching work was carried out by three conservators from Konservointi Helle together with Art Conservator Emilia Kallinen from the Turku Museum Centre who also acted as the person responsible for the project. As the work progressed, Professor Rogal was consulted where required.

Konservointi Helle has participated in a number of challenging and interesting projects since it was established.

“Detaching such a large fresco is one of the most unique and interesting projects in which I have been involved during my twenty years as an entrepreneur”, says entrepreneur and art conservator Liisa Helle-Wlodarczyk.

”This is a rare project. As far as I know, there is no other so large fresco in Finland. We have proceeded surprisingly well with the project”, says art conservator Emilia Kallinen.

“Each piece of this giant puzzle has to be processed in its own way, the working methods keep changing and developing as the work progresses”, she says.

The artist used both fresco and al secco techniques in Gateway to the East and West, and that made it very challenging to handle. The work started with surface cleaning because the wall painting had never been cleaned while it was on display. After the cleaning, the scaling paint surface was reinforced by consolidating, and then several layers of Japanese paper, gauze and linen cloth were attached to the surface using animal glue. As the reinforcement layers dried, a wet space panel was prepared by adding a thin layer of polyurethane and wet mortar, and a “package” with the colour layers cut from the wall was then attached to it. After the attaching, the layers of Japanese paper, gauze and linen cloth glued earlier on the colour surface were removed by using steam and hot water. That way the colour layer from the wall was revealed, and attached to the new base. The detached pieces of the painting will be stored in the warehouse of the Museum Centre.

The Turku Museum Centre was responsible for the contracts and purchases for the project, and inspected and approved the final outcome. Property Manager Matti Lindqvist acted as the contact person on behalf of the Port regarding access rights for the project and entry to the building.

Where will the fresco find its new home?

The new location of the wall painting has not yet been decided on. Thematically, placing the work of art related to travel and internationality in the new Ferry Terminal Turku might come naturally. Whether the fresco is suited to the new terminal in terms of style or in general will be found out when the architecture competition is finished during the spring, and the setting designed for the new terminal can be seen. It is nevertheless certain that such a detaching process will not be done again in the future, as the fresco will probably be attached to the wall in its new location with support plates and not directly to the wall surface.

VIDEO Documentary by the Turku Museum Centre on the detaching of the wall painting (ca 5 min.).

The relief of Vikainen’s “Beach Waiters” was also saved

The hero relief Waiting on the shore (1956 by Jussi Vikainen (1907–1992) is part of the City of Turku’s art collection and will also be detached from the wall of the passenger pavilion before the demolition of the building. 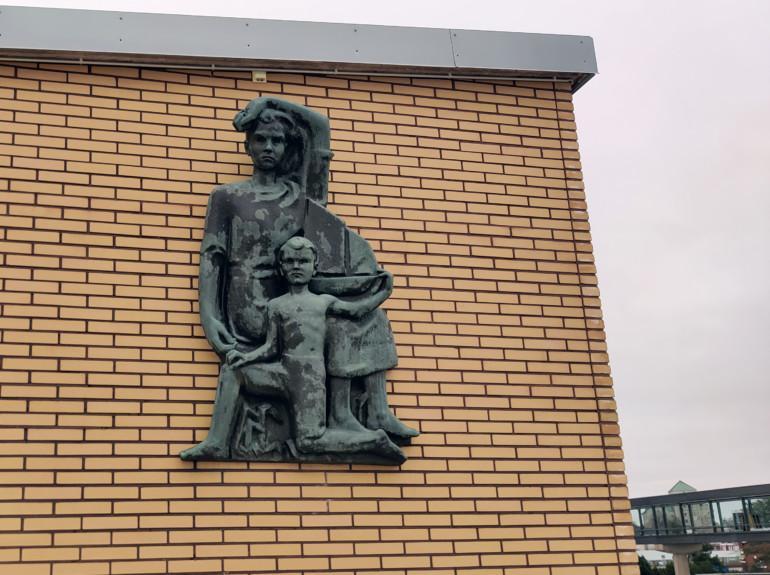 Hilkka Toivola’s fresco Gateway to the East and West from 1957. 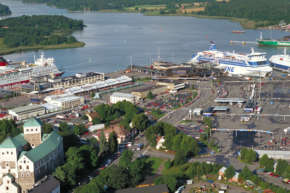 Today
Tell us your own story about the Port of Turku