Finland to become a pioneer in remote pilotage

The journey towards the change is only just starting, however. The amendment of the Pilotage Act that allows remote pilotage entered into force in early 2019, which speeded up a number of projects related to the matter. A provider of national pilotage services in Finland, Finnpilot Pilotage Oy was actively involved already in the preparation of the amendment and acts as an expert of pilotage in all key projects.

”We started the development of remote pilotage in practice on a clean slate. Operations in accordance with our targeted model have not been implemented anywhere, and there is not even a clear definition for remote pilotage. Finland now has a chance to act as a pioneer of remote pilotage and set the course into the future”, says Sanna Sonninen, Pilotage Director of Finnpilot Pilotage Oy.

New technologies and processes in a key role

In remote pilotage, the key roles are played by technology, communication and training. The present infrastructure of maritime routes does not allow for transferring to remote pilotage, in addition to which upgrades are also required from other parties operating within the sea transports ecosystem. The development of the necessary technologies and processes provides the Finnish seafaring branch, maritime industry and technology industry players with an excellent opportunity to advance their international business operations, too.

”In practice, the data transfer between the vessels, fairways and future remote pilotage points must be faultless. For example, the safety equipment on the fairways, including buoys, lateral marks and beacons, may be intelligent in the future, and their sensors may indicate the location of the vessel on the fairway.”

The premise of pilotage services is to increase the efficiency and flexibility of pilotage services and to lower the pilotage costs i.e. the service prices. One obvious requirement for the new service is that the safety of seafaring, the piloted vessels and pilots will remain at the current high level also in remote pilotage. 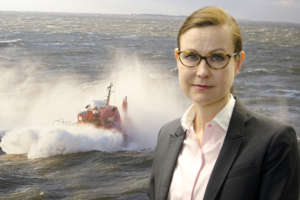 ”The goal of remote pilotage is to enable the pilotage of vessels also in such circumstances in which the weather conditions now prevent the pilot from entering or exiting the vessel. Remote pilotage will provide flexibility in terms of time e.g. in cases in which a vessel is leaving the port earlier than planned, and it need not wait for the pilot to come to the ship. Although the availability of the pilotage service is already at an excellent level, remote pilotage aims at even shorter request and waiting times. The pricing of remote pilotage and the flexible arrangement of the service are expected to generate savings for shipping companies.”

Finnpilot will be ready for remote pilotage in around 2025

According to the original schedule, the first remote pilotage trials were to be implemented in autumn 2020. The schedule was, however, delayed due to the business reorganisation of an important partner, due to which most of the practical trials cannot be started until 2021.

”In 2020 we have been building a mutual understanding on what remote pilotage is, what is required for implementing it, and how it will affect the ecosystem of sea transports on the whole. It’s clear that changes will be needed both in operations and technical solutions. The new operating models shall be agreed on in co-operation between key parties. Decisions have already been made on the trial fairways to be used during the research project in progress, but the decisions on the fairways on which remote pilotage will be offered will not be made until the changes required by operations and technical arrangements have been finalised. Many ports have already expressed their interest in being involved”, Pilotage Director Sanna Sonninen says.

The goal of Finnpilot Pilotage is that by spring 2022 a mutual understanding has been reached on the requirements of safe remote pilotage, and around three years later the company will be ready to apply for the first remote pilotage permits.

The research project related to One Sea co-operation is seeking risk analyses of remote pilotage and the opportunity to try out new data transfer technologies. The project supports the goal of One Sea which is to achieve a functional autonomous sea ecosystem by 2025.

A project managed by the Satakunta University of Applied Sciences which created a rough prototype of the remote pilotage point in 2019. The project will provide Finnpilot with information on the use and development of location and weather condition data.

Novia’s/Aboa Mare’s simulator development project in which the purpose is to create a remote operating environment that is connected to an existing ship simulator. The project has already generated descriptions on the different stages of the remote pilotage process.

Traffic and logistics
A thousand fairways to Finland