Markku Alahäme is starting as the Port of Turku’s Technical Director on 1 June at a very interesting time. On his desk waits a large project concerning the joint passenger terminal of shipping companies. “The letter of intent on the joint terminal has already been signed. A decision on the project will probably be made during the summer. After that the planning will start properly, allowing us to proceed to the investment decision.”

The actual terminal building is just one part of a bigger picture. “Cargo operations and a number of warehouses will be moving away from the Turku Castle area. We will have to find new locations for them and ensure that the new system works efficiently.”

The project is significant for the Port of Turku and its customers, and for the City of Turku as well. “A large area in a great place on the shore will be released for use by the City.” The goal is to have the joint terminal completed by the end of 2025.

Mr Alahäme has good prerequisites for participating in the big project. He has worked at the service of the Port of Turku since 1995.

Before taking over as Technical Director, he worked as the Port of Turku’s Development Manager with duties including maintenance of the quality, environmental and safety systems, as well as development of operations and environmental issues. He has also contributed to the development projects for the Port’s operations and services, and various international projects. “The Port is a very interesting and diverse workplace. As a new position opened, I was ready to take on the challenge.”

Master of Science in Production Economics by education, Mr Alahäme has learned to know the Port staff as well as other players and stakeholders in the area during his career. He points out that the views of all stakeholders need to be heard e.g. in the planning of the joint terminal. “A big project involves many zoning and traffic issues, and the shipping companies and the cargo operations, of course, have their own wishes.”

The duties of the Technical Director also include looking after the present infrastructure, such as warehouses, railway tracks, fairways and cranes. “One key theme is environmental issues. We have, for example, stopped the disposal of dredging masses in the sea and are looking for suitable places for disposal on land. Moreover, the Port’s energy efficiency will be enhanced by replacing old light fixtures with LED lamps.”

The Port is also affected by the megatrends of automation and digitalisation. Viking Line’s current berth will be equipped with an automooring system, and an automatic traffic guidance system is being planned for the joint terminal area. “Furthermore, we are running together with shipping companies the SecurePax project aimed at improving security which includes piloting of e.g. identification of people out on the field areas and in terminals. In conjunction with that the Turku University of Applied Sciences is testing a 5G network.”

“There are certainly many interesting things going on in the Port of Turku at the moment”, Mr Alahäme sums up. 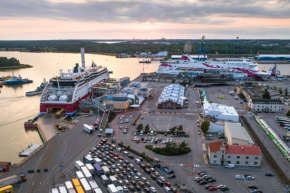