The Port of Turku’s goal is to minimise the adverse impacts of its operations on the environment. Environmental impacts are followed closely, and that is also required of partners. Environmental co-operation is also carried out internationally between the Baltic Sea ports.

Markku Alahäme, Development Manager of the Port of Turku, says that the new environmental programme acts according to the City’s climate plan towards the same goal, carbon neutral Turku.

”Through co-operation between the Port and the City we aim to affect, for example, the impacts of car ferry traffic”, says Development Manager Risto Veivo. His areas of responsibility in the City of Turku’s administration are climate, environmental and sustainable development.

Shipping companies are encouraged to decrease the emissions caused by vessel traffic. The LNG-fuelled Viking Grace with its rotor sail is a trailblazer. Viking Line’s new LNG-fuelled vessel is due for completion in 2021, which requires a bunkering facility in Turku.

The Port has contributed to the development for offering onshore electricity to vessels. Particular investments have been made in reception of waste water. Cruise liners are offered an opportunity to pump their waste water to the shore free of charge. These decisions have true significance to the environmental impacts of the operations in Turku and an effect on the state of the Baltic Sea. Mr Alahäme says that one way to improve the water quality in the Port would be systems for vessel bottom brushing that recover the materials that come off.

The climate strategy is also put into practice in construction.

”Environmental and climate impacts are taken better into account during the whole lifecycle of investment projects”, Mr Alahäme says. That can be implemented particularly in the construction of the new terminal with completion planned for 2025.

The environmental programme continues investments for enhancing the use of energy and reduction of emissions. The Port is investing in low-emission vehicles and will e.g. replace outdoor lights with LED lamps.

New items include preparing for the effects and risk of climate change, and adapting to the change.

”The Port’s decision to end disposal of dredging masses in the sea by 2024 is one solution that will improve the adaptation capacity of the Archipelago Sea in the long term. It is a major adaptation measure for climate change”, Mr Veivo says.

The Port has been conducting active climate and quality work for a long time. The impacts of the disposal of dredging masses have been evaluated e.g. by following the state of spawning areas of Baltic herring. The Port’s environmental follow-up also includes e.g. mapping of noise.

The City has done its share. Its biggest individual contribution to the well-being of the Baltic Sea is the building of the Kakola waste water purification plant which cost 140 million euros.

”The Kakola purification plant has considerably improved the state of water in and around Turku. It efficiently purifies the waste water of 13 municipalities”. Mr Veivo says. According to him, the purification plant is one of the best in the Nordic countries, better than most purification plants in Sweden and Denmark. The effect on the state of the Archipelago Sea was immediately visible, and the effects will accumulate in the future.

”The environment will continue to be an important factor when the Port’s operations are being developed”, Mr Alahäme says.

The goal of the City of Turku’s climate plan approved in 2018 is to halve the greenhouse gas emissions from the level of 1990 by 2021. At the initial state, a quarter of the reduction goal had been reached. The goal for 2029 is that Turku is a carbon neutral city whose net emissions are zero or negative. From 2029 Turku will be climate positive i.e. an area that no longer warms the climate but cools it. 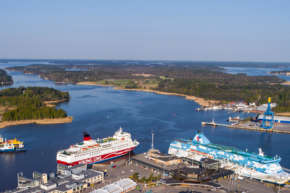 Environment and safety
Follow-up is an essential part of dredging