The 23-hour back-and-forth cruises remain as popular as ever, but the frequent ship connections also provide a wonderful opportunity to spend a wonderful day off in Stockholm. In the autumn and winter season from 13 September 2022 to 31 March 2023, there are two departures to Stockholm per day, when Tallink Silja temporarily moves to the Turku-Kapellskär route.

Evening departures take you to the city for the morning

Those heading to Stockholm for a day start their voyage in the evening in Turku, on board the comfortable modern ferries of Viking Line or Silja Line. The early part of the trip goes nicely admiring the vistas in the archipelago, which is called the most beautiful in the world, and enjoying the various services on board before it is time for bed to charge the batteries for the next day.

After a good night’s sleep and an abundant breakfast on board, it is time to disembark and head to the city. It is advisable to pack lightly for a day trip in Stockholm. Some of the luggage can be left in the storage lockers in the terminal and you can pack the necessary items e.g. in a small backpack to take with you to the city.

Quick transport to the city-centre and sights

Depending on the shipping company there are different options for getting downtown. For those arriving on Tallink Silja, the easiest way is to take Tunnelbana or bus number 76. The bust stop is 200 metres away from the terminal and the line goes directly to Kungsträdgården. A pleasant option for passengers on Viking Line is the city ferry m/s Emelie which departs at the Masthamnen quay, located a few hundred meters away from the Viking Line terminal.

M/s Emelie is an easy way to get e.g. to Djurgården where you will find e.g. the Gröna Lund amusement park, the Wasa Museum, Viking Museum, and Abba Museum. M/s Emelie continues from Djurgården to Nybroplan which is just a short walk away from Kungsträdgården and the Old Town.

Climb on the stage in the Abba Museum

You should not plan too many activities for a one-day trip but focus on a few sights you like. The aforementioned Abba Museum is a must for all Abba fans and pop music lovers. There is a huge number of different Abba-related materials on display, ranging from stage outfits and instruments to photos and videos from different phases of the band. Perhaps the most amusing memories for museum-goers are offered by a number of interactive sounds and video stations where the visitors can even climb on the stage to perform with the Abba holograms.

Number one item for culture is Fotografiska

There are also many interesting art museums in Stockholm for lovers of both contemporary and classical art. One of the most popular items is a museum of photography Fotografiska which offers continuously several exhibitions that change every few months. Perhaps the most interesting exhibition of the summer season is Terry O’Neill’s Stars for which he has photographed big stars of the 20th century in movies, rock music and sports. Located in an old customs house, the Museum also has a popular restaurant and a diverse museum shop. Fotografiska is located close to the Viking Line terminal, along the walking route from the city.

Old Town is charming every time

The always beautiful Stockholm Old Town is a sight in itself. The centuries-old narrow lanes and colourful buildings are always fascinating, both for first-timers and experienced visitors in Stockholm. In addition to the Royal Palace, one of the most popular places to see is the Nobel Museum. It is nice to sit down to enjoy food and drink and follow the hustle and bustle of tourists on the terrace of restaurants on Stortorget square. If you have the time and desire, you can shop in the Old Town boutiques, but shopping can also be easily done on board the ship on the way back. The ships depart from Stockholm in the evening and arrive in Turku the next morning, and the travellers have gained many new experiences.

In the fall and winter season from 13 September 2022 to 31 March 2023, Tallink Silja offers a new cruise option. A 22-hour cruise on Baltic Princess from Turku to Kapellskär offers star entertainment and a program for every taste. Those traveling with their own vehicle can also book a route trip and continue from there towards Stockholm or Europe. 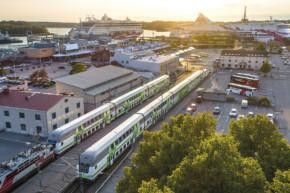 Traffic and logistics
Passenger traffic picked up from previous year