Mann Lines’ new ro-ro vessel has 3,000 lane metres of cargo space – as much as m/s Foreteller which it replaced. The vessel arrived directly from the shipyard and is 15 years younger than its predecessor. That means significantly better fuel-efficiency compared to the vessel that previously operated the route.

The stay in the port is also more efficient, as the fixed ramp on the vessel’s weather deck allows for simultaneous loading with the main deck. Manoeuvring of the vessel coming directly from the shipyard is easier than before, because it has twice the number of steering propellers compared to its predecessor.

“You could sum it up by saying that the vessel brings the technical standard of the line to the level of 2018. It means above all operational reliability and continuity”, says David Symes, Operations Manager of Mann Lines.

According to General Manager Timo Helanto, the fuel-efficiency of a modern engine is the greatest added value of a vessel.

“We can reduce both the fuel consumption and emissions, and that’s of course what we want.”

Mr Helanto says that the development of diesel engines of ships has progressed very fast during the past ten years.

“If you compare the current engines to 20 years old diesels, they are like day and night. The operating principle is the same, but otherwise they have almost nothing in common. In addition to the engines, for example the ship hulls have become more streamlined.”

In cargo transports, it’s ultimately money that matters. David Symes from Mann Lines believes that when the cost of clean technology becomes lower than that of the old one, the shift will be quick. Mr Helanto believes that we are at that situation or will be there shortly.

“Using obsolete technology today is already expensive in every respect. Furthermore, we can see that in the future all regulations will become stricter, and there will be more restrictions on emissions.”

The schedule of the vessel operating the Turku–Bremerhaven–Harwich–Cuxhaven–Paldiski–Turku route will remain the same. The ship tours the route in nine days and carries e.g. steel and machinery, such as tractors, combined harvesters, and mining vehicles.

“In general, all products of the manufacturing industry are suited to be transported by ML Freyja, in both imports and exports. The new vessel can carry heavier items, which is a benefit especially with project shipments of the industry”, Mr Helanto says.

Receiving double containers in one go also increases the efficiency of load handling and shortens the port calls.

“In the long term such small things have great importance when they are multiplied by the number of annual port calls and projected into the future. The vessel is contracted to us for five years.” 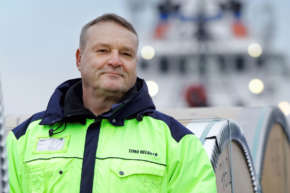