Tallink Silja’s Silja Galaxy cruise liner stays daily in the Port of Turku for one hour and 15 minutes. The timetable is tight. Within the short time the cabins are cleaned, new passengers are taken in, the car deck is emptied and filled again, and supplies are stocked. But not quite everybody is in a hurry during the call in the port.

The ship is moored and the passenger bridges are opened. The group of cleaners coming from the port embarks. The passengers that stay in Turku disembark.

The receptionist carries out the morning routines at the reception on the 7th deck, takes in the day’s newspapers and reads out announcements to latecomers prompting them to go to the car deck and drive their car out. “Some are still sleeping, and others are having breakfast”, says receptionist who has worked on ships for 25 years.

The butler takes in customers to the special breakfast at á la carte restaurant Grill House. His shift has started already at five, the serving of breakfast begins two hours before arrival in the port.

“For us, stopping in the port is like a break. Those who stay in Turku have had their breakfast, and cruise passengers have not yet woken up.”

The car deck in turn is filled with hustle and bustle. It’s quite noisy when the heavy vehicles drive out of the ship. The First Mate guides the outgoing traffic and sees to it that everything goes as planned, so that e.g. reporters and photographers are not run over by a lorry.

It’s amazing how quickly the car deck with 1,100 metres of space is cleared. In fifteen minutes the car deck is empty. Next the ship takes in service deliveries and then the new vehicles that are going to Stockholm. The car deck is filled and the vehicles are fastened in accordance with the First Mate’s loading plan, because the weight has to be divided evenly. 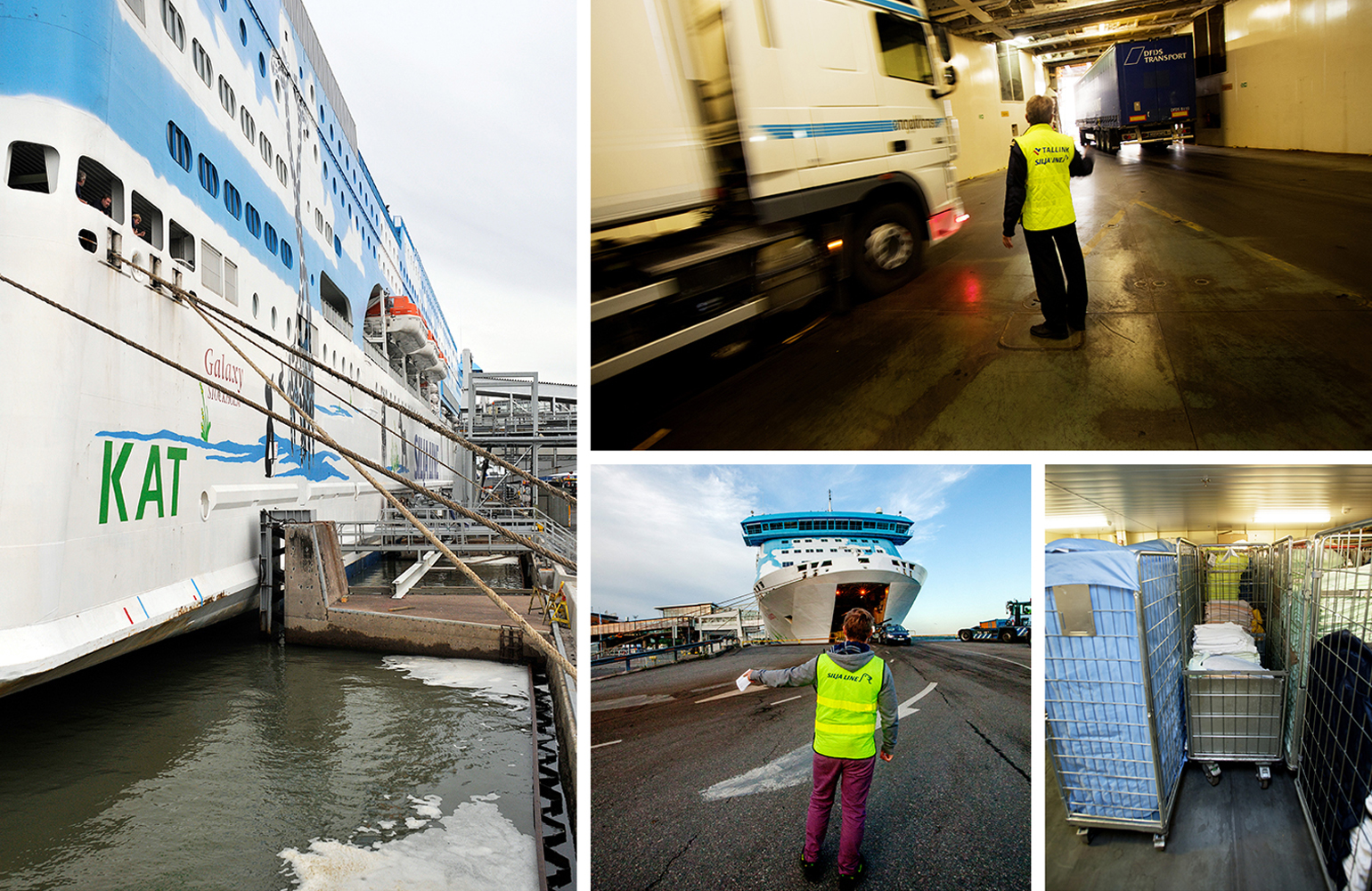 The cabins on the 8th deck are also bustling: the cleaners are at work. The ship is not full, and many of the passengers are on a cruise coming from Sweden, so all 795 cabins need not be cleaned.

The cabin cleaner has been cleaning cabins, changing sheets, dusting and emptying the refuse bins for over an hour. The vacuuming group is coming after her. The cabin hostess organises the cleaning of cabins in her area. “We are always planning the next port call. There are no dead moments.”

The area cleaner is also doing her rounds. Public facilities are being cleaned continuously when the ship is on the move, also at night. Area cleaner’s morning shift started at six. Some areas are easiest to clean during port call when there are fewer passengers. “Otherwise it’s the same thing all over again.”

The storeroom on the second deck is taking in goods. During the summer season, seven pallets of beer alone is taken in every day. One pallet contains 90 cases with 24 cans in each. In addition, there are other drinks, sweets and gift items. More than 20 pallets in total.

“Everything is brought down with one lift from a container located on the car deck and we have under one hour to get everything in”, explains the Shop Manager.

The engine control room that operates Silja Galaxy’s four Rolls Royce main engines is preparing for departure and starting the engines. The Machine Operator’s workplace looks like the set of a James Bond film with the meters and blinking lights. “Everything that has to do with running the engines takes place here. We are constantly in contact with the bridge”, Machine Operator explains.

In the engine control room the stay in the Port of Turku is the most peaceful moment of the day. “Intake of drinking water, removal of waste water and refuelling are done in Stockholm”, Machine Operator says.