The new Viking Glory was launched in late January at Xiamen Shipbuilding Industry’s shipyard in China. Kari Granberg says that the work was supervised at the shipyard by Viking Line’s regular personnel, and the Nordic style is also visible in the ship’s design and implementation.

Wärtsilä supplied the ship’s LNG, engine and navigation systems, and other providers also include Turku-based companies, such as Deltamarin and Projektia. The architectural design was implemented by the Swedish company Koncept. Other partners include ABB Marine, Kone, Almaco, Climeon, Evac, and Pointman. 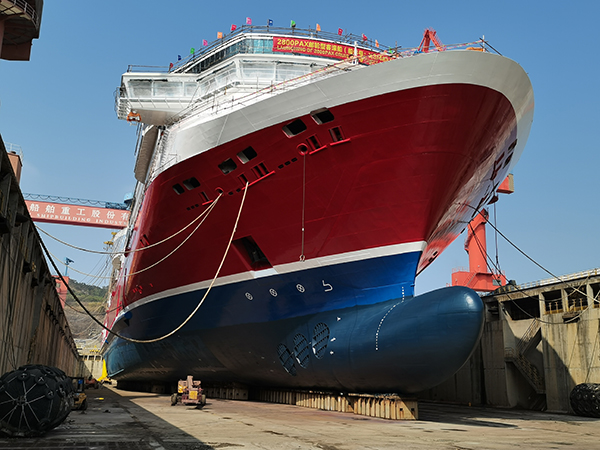 The coronavirus naturally slowed down the building project. The launch was nevertheless a great moment of joy. ”The vessel moves beautifully and lightly in water, I am very happy about the development so far”, says CEO Jan Hanses.

The new vessel puts into practice Viking Line’s vision on responsibility and Nordic technology. The essence of Viking Glory is intended to reflect the archipelago through which it will sail. Energy-efficiency is, however, one of Viking Glory’s most important qualities for Jan Hanses. ”The ship will represent the absolute peak in terms of environmental innovations and technology.”

The energy consumption of Viking Glory has been further reduced by 10 per cent compared to Viking Grace. One important factor is the new LNG system. The liquefied gas is brought to the ship at -162 degrees. The cold will be utilised in a completely new way e.g. in refrigeration of cold storage rooms, freezers and technical spaces. It has not been done anywhere before. Secondly, the booking system communicates directly with the ship. All cabins that are not booked will automatically switch to energy-save mode. As there are more than 900 cabins on the ship, it has great significance.

“Viking Glory is a first class vessel for a period of 30 years from now. During that time the pandemic will account for just a short period”, Mr Hanses states. He says that the plan is for the ship to sail under the Finnish flag. Although Viking Glory was built in China, there is a clear policy for the future. ”Whenever it is possible to build in Finland, we will favour that option.”

The ship will arrive in Turku in late 2021. Operating on the Turku–Mariehamn–Stockholm route will begin at the turn of January and February 2022. The vessel will replace Viking Amorella on evening departures from Stockholm. The booking is expected to open in late summer.

Viking Glory’s Captain Ulf Lindroos promises to sail with the ship all the way on its voyage from China to Turku. ”We will leave in November and sail either through Suez or around Africa.”

Mr Lindroos admits that there are dangers along the way for which they just have to be prepared. ”We will have to take into account the exceptional conditions at the time. The route needs to be planned so that we will get safely to Turku.”

Viking Glory uses ABB’s Azipod system in which a propulsion unit that rotates 360 degrees replaces the traditional rudder. The Mates will be trained to use the system with simulators at ABB in Helsinki or in Aboa Mare in Turku. Mr Lindroos has also taken a test drive on Azipod. ”It felt positive. Viking Glory is fitted with two Azipod propulsion systems instead of two propellers and a rudder. The advantage of Azipod is that the manoeuvrability is easier and faster. In addition, power is available if more is needed. The fuel consumption also decreases.”

Panoramic windows open up views to the sea

One of Viking Glory’s signature features is the large windows that help to enjoy the archipelago even more and open up to the seascape. The ship’s Launch Manager Michaela Lindström believes that Viking Glory will be the most modern vessel on the Baltic Sea, a completely unique ship that people are really eagerly waiting for. She says that passenger comfort is the number one thing on board, vibration and noise have been minimised. The ship will offer the spirit of slow cruise for both business and leisure passengers.

Truck drivers have also been taken into account on board the ship. There are cabins and a dedicated sauna area for them. The cargo space is also bigger. While Viking Grace has 1,250 lane metres, the space available on Viking Glory is 1,500 lane metres. 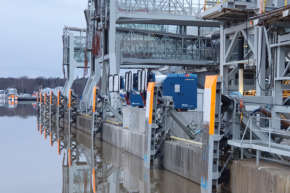