The start of 2020 was promising for passenger traffic in the Port of Turku. During the first two months of the year the passenger volumes were still higher compared to the previous year, but from March on the figures fell rapidly due to the global coronavirus pandemic.

As a result of the travel restrictions set by the Finnish Government and the general fear about the spreading of the disease the number of passengers in 2020 stood in the end at just 1.1 million. Compared to the previous year, two million passengers less travelled through the Port of Turku. Thanks to the demand for the cargo transports between Turku and Stockholm the ferries of both Viking Line and Tallink Silja operated as per normal throughout the year, which enabled necessary travel also during the restrictions. During the quieter epidemic phase in July and August Tallink Silja also operated direct departures from Turku to Tallinn. The shipping companies did a good job in reducing the risk of infections and ensuring the safety of passengers. 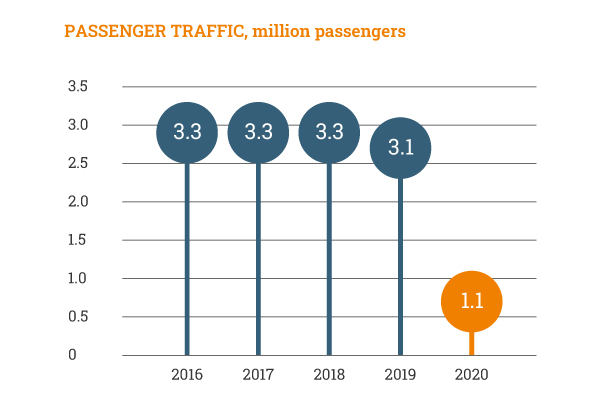 Travel restrictions are expected to be lifted during 2021 as the coronavirus vaccinations proceed. The Port of Turku believes that it will lead to strong growth of demand for sea travel once the bottled up demand begins to unleash. It is to be expected that when travelling is gradually released, the demand will at first be directed at trips to nearby destinations, and that will considerably benefit the Port of Turku as the market leader of passenger traffic between Finland and Scandinavia.

The future of passenger traffic in the Port seems bright also otherwise. In early 2022, Viking Line’s new flagship m/s Viking Glory will start service on the company’s Turku–Stockholm route. The most modern and environmentally sound passenger vessel in the Baltic Sea will offer unique experiences while sailing through the most beautiful archipelago and sea views in the world. After the arrival of the new ship the route between Turku and Stockholm will be operated by the newest, most comfortable and environmentally sound stock of vessels in the Baltic Sea. The completion of the new joint terminal and the building of the Linnanniemi district planned around the Turku Castle will certainly bring new customers to the passenger traffic in the Port of Turku, too.

In addition to the travel between Finland and Sweden, the Port of Turku provides a fast and trouble-free route to the passengers heading further to Europe in their own car. In the future, it will be possible to continue after the sea voyage by a high-speed train connection to the heart of Europe when the new rail connections being planned in Sweden are completed.

Cruise liner traffic is waiting for the next summer

The coronavirus also removed the passengers from the cruise liner traffic in the Baltic Sea. Based on advance booking, the Port of Turku was waiting for a record high number of vessel calls, but none took place in 2020.

As for 2021, the situation is still expectant regarding at what point of the year the cruise liner traffic will restart. At the time, five vessel calls have been booked for the next summer, three of which are for the same ship. Each of the ships is coming to Turku for the first time, which indicates successful marketing efforts of the Port of Turku and Visit Turku as well as the need of the cruise lines to find new ports of call for their customers.

The same message is conveyed by the inquiries of cruise organisers, and their large number creates a trust in the future of the cruise business.

Another positive piece of news for the future of the cruise business is the progress of the Linnanniemi district planned around the Turku Castle. Located next to the Port, Linnannniemi will be built into a centre of urban culture the year round with a strong presence of the sea and history. Key roles in the development of the area will be played by the Turku Castle, The Forum Marinum Maritime Centre, and the Museum of History and the Future that will be placed in the area at a later date.

There is a dedicated quay for larger cruise liners in the inner harbour which is ready to receive up to 230 metres long vessels. Whenever possible, vessels with a length of under 100 metres will be berthed in the River Aura from where the passengers have just a short walk to the city-centre along the riverside streets. In co-operation with VisitTurku the passengers are offered diverse services ranging from guidance to excursion programmes.