In the cargo hold of Scot Carrier, men wearing safety harnesses attach a giant pipe to the derrick. The crane lifts the load carefully from the hold to the quay. On the shore the pipe is detached from its fasteners – using a hoisting cage – and after that a heavy-duty forklift transfers it to the outdoor storage area.

The pipes are used for the new discharge water pipe of the Kakolanmäki wastewater purification plant that will reach from the plant to the harbour basin with a length of just over one kilometre.

“The building of the discharge water pipe is also a rather unique project. The Irish company Ward & Burke Group Ltd will place the pipes in the underground excavation”, Ms Iljin points out.

TurkuSteve will also transfer the pipes from the storage area to the construction site using terminal tractors and mafi platforms. A special cradle was built on the mafi for the pipes.

“We also take care of the unloading of containers and trucks and transferring of the materials to the construction site.” 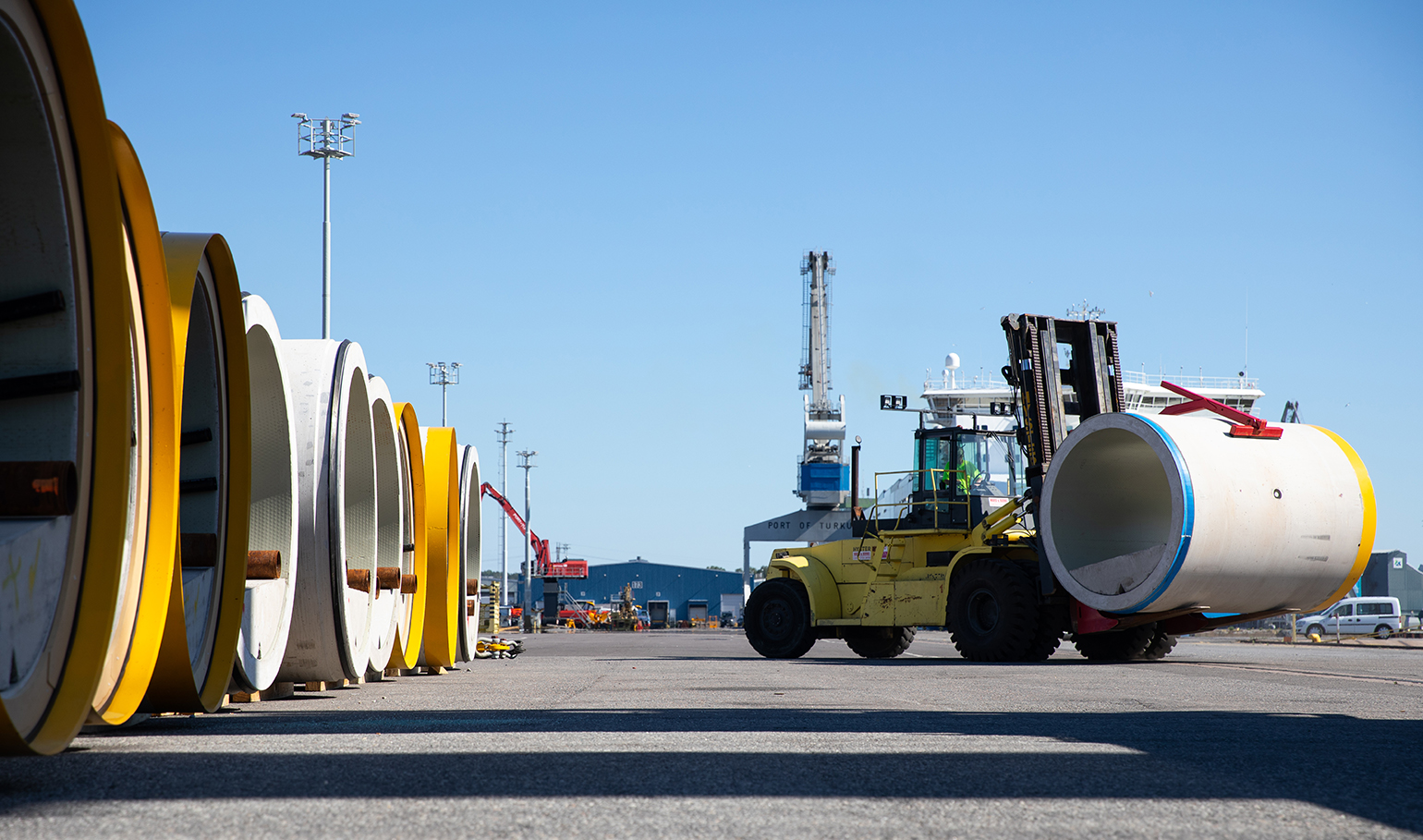 Machines were also lifted in parts

Before Scot Carrier, the same shipping company’s vessels Scot Pioneer and Scot Explorer have also called in Turku. The first ship brought machines, the second one 121 pipes, and today the ship is carrying 82 pipes. At the time of the interview, in late June, all materials needed for the project have arrived in Turku.

”The machines had been disassembled. But the lifting of heavy, asymmetric parts also had to be planned very carefully.”

Plenty of space and cranes in the port

According to Ms Iljin, the Port of Turku is ideally suited for large project shipments.

”Turku has plenty of outdoor storage space which is required by project shipments. Cranes are readily available and the Port is a flexible partner. We have, for example, thought about the special requirements of different projects together, and they were able to provide storage space suited exactly for the purpose.”

TurkuSteve has a lot of experience in demanding project shipments. It has helped to deliver e.g. a sugar plant and sawmill dryers to Russia, asphalt stations to the Middle East, mining equipment to China and America, and a wave machine and trampoline park to the Bahamas.

TurkuSteve has also lifted city ferry Föri from the River Aura and then replaced it after servicing.

Another giant pipe travels through the air from the hold to the quay. We time it at five minutes. There are many intermediate stages in lifting, and of course safety is never compromised.

The building and underground placement of the discharge water pipe will start a couple of days later. The goal is that the Irish pipe fitters will have completed their work by December.

After that TurkuSteve will disassemble the machines and load them on board a ship. Once the machine parts have been supported with wooden structures to keep them in place, they will be hauled to the next project location or back to their home port in Ireland. That will happen in 2021.

”Then we can maybe raise a pint of Guinness”, Riika-Maria Iljin chuckles.

Founded in 1972, Turku Stevedoring Oy is a family-owned provider of stevedore and logistics services in the port of Turku. In addition to stevedoring, the company offers customer-oriented service concepts. It specialises in project shipments and handling of heavy items.