When the state of emergency was declared in March, and the Emergency Powers Act was taken into use in Finland for the first time since the wars, the ports and their services were determined as critical functions for society. The importance of the regular security of supply practices of the ports is visible:
”In the rapidly escalated circumstances the ports adapted themselves to the situation very quickly. Internal border inspections in the EU’s Schengen Area were introduced and travelling was restricted to a minimum”, Ms Mäkilä says.

In Finland, the ports with critical importance to security of supply are essential for the functioning of the economy and e.g. the availability of pharmaceutical and food products. The ports of Turku and Helsinki play a key role, and when restrictions on passenger traffic entered into force, cargo transports had to find new routes to the main markets almost overnight. The ports of Turku and Naantali provide the important connections to Sweden and the rest of Scandinavia. Helsinki in turn provides the connections to Tallinn, the Baltic States and further to Central Europe during the state of emergency.
”In the long term, Turku is a port of important connections that forms a cornerstone for security of supply”, Ms Mäkilä says.

Critical ports at the heart of interaction

Ms Mäkilä says that the ports with critical importance to security of supply are now at the heart of interaction, continuously providing situational picture to support the highest decision-makers of the country.
“We have daily co-ordination meetings with port directors and security directors. In those we run through the management of the continuity of ports and port operations, and critical aspects, such as sufficiency of personnel and flow of traffic in border control.”

In addition, the Finnish Port Association maintains close contacts with the industry associations i.e. the Finnish Shipowners’ Association, the Finnish Port Operators Association, and Shipbrokers Finland that represents ship agents, and also through forwarding and logistics with road transports. Regular interaction is maintained with shipping companies under the Finnish flag and to some extent with internationally-owned global container shipping companies.
”Through very concise Teams meetings we have managed to go through the daily round; what has changed since yesterday, are there any bottlenecks, are goods transports getting through e.g. at the Uusimaa border, and how do internal border inspections function. Co-operation with the authorities, such as the Border Guard, Traficom, and the Finnish Institute for Health and Welfare is working great.”

The Finnish public-private co-operation system is exceptional from the international point of view. The private sector provides a situational picture to the National Emergency Supply Agency which communicates to the Prime Minister when decisions are made at the political level.”

Ms Mäkilä has also discussed with the EU Commission’s Transport Commissioner and emphasised how important it is for Finland that the borders are not closed for goods transports in Central Europe.
”It’s vital for us that trucks can drive north of Denmark and through Poland to the Baltic States or from the Czech Republic to Poland and catch the ships on schedule. The internal markets have to remain up and running.” 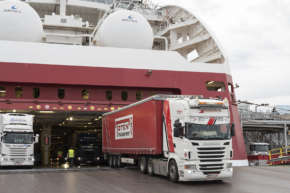 Today
High cargo volumes in the Port of Turku