Before starting at the service of the Port of Turku, Erik Söderholm has made a long career in executive positions of both Finnish and international logistics companies. Straight after completing studies he went to work in the shipping department of forest industry company Enso-Gutzeit, presently Stora Enso, where he was responsible for export shipping e.g. to German-speaking Europe and Arab countries.

”Perhaps the most important posts in my career so far were the establishment of DFDS Transport on the Finnish market as the Deputy Managing Director, and working as the Managing Director of the company’s Polish subsidiary, during which the operations were steered towards the Western corporate culture. After returning to Finland I worked for five years in the management of Wilson Logistics, and then I was elected the CEO of Pohjolan Liikenne Group and given the mission to modernise the company. In conjunction with an organisation reform in the Finnish State Railways VR I took over the group’s logistics division with responsibility for the group’s cargo transports on rail”, Erik Söderholm recaps his career.

Demand for Mr Söderholm’s management skills continued after the post at VR. At the service of DB Schenker Logistics he was responsible for the company’s land transports in the Europe North & East region. The large area extended from the Russian Pacific coast to Ireland and covered thirteen countries in total. The last three years before being elected the Managing Director of the Port of Turku he worked at the service of Kuehne & Nagel with responsibility for the company’s land transports in the Nordic countries.

”Over a period of 35 years I have come to know road, sea, air and rail transports, and the transport chains formed by them often crossed paths in the Port of Turku. Moving to the other side of the table after earlier co-operation is an interesting, challenging and inspiring step – especially now that a number of major reforms are taking place in the Port of Turku”, Erik Söderholm stresses.

Goal of cargo transport is to open new routes

The new Managing Director views the operations and future of the Port of Turku with experience of a logistics professional but also by envisioning something new. He says that the fundamentals of port operations are in good shape, but as the world is changing at an increasingly fast pace, the Port should seize the opportunities arising from the change.

”The Port of Turku’s present strengths will remain valid. The Port’s infrastructure is in good condition and the personnel is skilled, which is also indicated by the high score for professional skills in the most recent customer satisfaction survey. One of our key strengths is the Port’s location which makes Turku Finland’s bridgehead to Scandinavia. Thanks to our geographical advantage, Turku provides by far the fastest sea route to Stockholm from where it’s easy to move on to the rest of Scandinavia and Western Europe. In terms of truck transports, the Stockholm route is also excellently suited to the regulations on rest periods of drivers”, Managing Director Erik Söderholm says.

He still considers unit transports and shipments of processed goods, including project shipments of heavy industry, the principal target group of cargo operations. There is room and service capacity in the Port of Turku for higher cargo volumes than the present ones. Thus the Port of Turku is actively mapping opportunities for opening new ship routes e.g. to Poland. The future visions also include a truck train from Turku to Oulu.

Erik Söderholm thinks that the strongest attraction factors of passenger traffic are modern vessels and seascapes offered by the unique archipelago. He also emphasises the significance of the archipelago for attracting more Baltic Sea cruise liners to call in Turku. The number of cruise liners expected this year is already greater than in previous years.

”The passenger volumes have stabilised to around 3.5 million passengers annually, which makes Turku the leading port in passenger traffic between Finland and Sweden. One factor in that is certainly the gorgeous archipelago vistas at both ends of the route. Next year, new ship Viking Glory will start sailing between Turku and Stockholm and provide an excellent addition to the also otherwise modern stock of vessels on the route. The new vessel will certainly increase the passenger volumes, too, for which the Port is already preparing e.g. by improving the smooth flow of road traffic in the port area. The joint terminal project serving the passengers on our main route is proceeding on schedule. The letter of intent signed by the Port of Turku, the City, Tallink Silja and Viking Line aims at introducing the new terminal in 2025”, Mr Söderholm confirms.

Port will integrate into the city-centre in a new way

In Erik Söderholm’s opinion, one of the Port of Turku’s strengths in terms of tourism is the Port’s location within a walking distance from the city-centre. In the summer in particular a walk from the port to the city-centre along the banks of the River Aura offers many things to see for tourists.

”The recently announced competition on ideas for developing the Linnanniemi district will link the port even more tightly to the rest of the city. The district covers the area around the Turku Castle and the west bank at the mouth of the River Aura and is located in the immediate vicinity of our new joint terminal, and once completed, it will be a new attraction factor both for the Port’s passenger traffic and the whole of the City of Turku”, Mr Söderholm predicts. 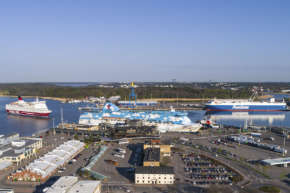