In mid-October, everything is getting ready for the disposal of dredging masses in Lauttaranta. There is a brand new quay on the shore where the first barges are expected to arrive in November. In addition, disposal cells have been built on the site from the blasted rock located there.

“The water in the dredging masses will be filtered through the walls of the cells and forwarded back to the sea. The collecting pool has a lime filtering dam that removes acidity. The process is measured carefully”, says Anne Savola, mass co-ordinator of the City of Turku.

She adds that before the dredging masses are placed in Lauttaranta, the masses from each dredging site will be inspected to ensure that their content is within the limit values. Inspections will also be carried out on-site in Lauttaranta. In addition, the City will apply for a separate water permit for dredging.

Turku stopped the disposal of dredging masses in the sea for environmental reasons, to protect the Baltic Sea.
“Also now when dredging masses are placed on land we will of course carefully look after the environment”, Ms Savola stresses.

Flood zones elevated for residential use

The dredging masses taken to Lauttaranta will be used to elevate the flood zone by as much as 3–5 metres over the years. In the future, the plan is to build a new residential area on top of the masses.

“But before that, the dredging masses will be stabilised, which means increasing their bearing capacity. Stabilising is done with a mixture containing lime cement and as new material fly ash which comes from industry and energy production. So the project also serves circular economy”, Ms Savola points out.

She adds that dredging and disposal activities have many positive effects on the economy. They help, for example, to enable diverse maritime traffic and provide employment for local businesses.

The City of Turku has applied for amendments from the Regional State Administrative Agency of Southern Finland for the limit values of harmful substances determined in its previous environmental and water permits.

“All dredging masses to be placed in the area comply with the original, very strict criteria. We applied for a small amendment with a view to future needs. According to our view and based on risk mapping, the new limit values are also sufficient”, Ms Savola emphasises.

“The fairway is dredged to enable the ship due for completion in 2023 at the Meyer shipyard to sail out”, says Markku Alahäme, Technical Director of the Port of Turku.

The Port of Turku will pay for the dredging of the fairway and Meyer for its quay area. According to Mr Alahäme, the co-operation has proceeded flexibly.

“The dredging starts in November, and everything should be finished by March, before the spawning season of fish and the nesting season of birds begins.”

In the future, dredging masses will also come from other fairways and the River Aura. The river also needs to be dredged so that the large sailing ships can access the riverbanks for the Tall Ships Races in 2024.

“Dredging has to be carried out regularly because the River Aura – however nice it is otherwise – brings with it a huge volume of clay”, Mr Alahäme points out.

He adds that the Port of Turku is the only port in the country the maintenance of which requires regular dredging.

Environment and safety
Dredging masses are reused in earthworks in Turku 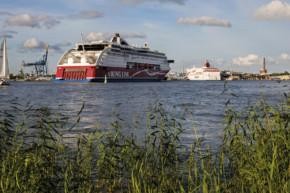 Environment and safety
Dredging contributes to the safety of seafaring